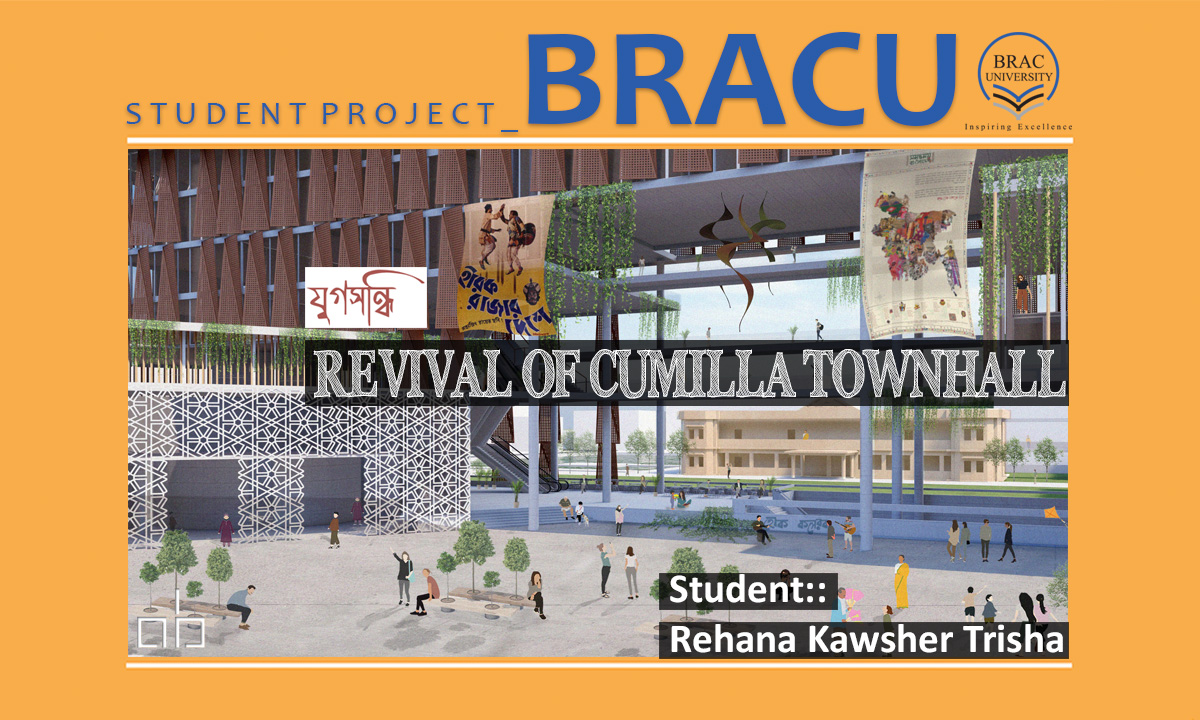 Revival of Cumilla Townhall  Site is located at Kandirpaar, Cumilla

Nagar milonayoton is a gathering place for the city’s people to celebrate, meet, and greet one another, as well as a civic center. The century-old Birchandra Ganapathagar and Nagar Milonayton (the town hall) of Cumilla town have truly been serving as a “Nagar milonayoton”. The premises of the town hall building is a common gathering place for the city dwellers and the lush green front yard is a breathing space in the heart of Cumilla city. However, despite its significance as an archaeological site with more than hundreds of years of history, tradition, and culture, a proposal has been made to demolish the old townhall and replace it with a new and modern building with more facilities. While many heritage buildings are being demolished in the name of development, the Cumilla townhall building can set an example by being preserved and this is the approach taken by this project. The followings were the objectives of the design: explore the historical background of Cumilla town hall more deeply and establish the heritage value of this building, accommodating new functions, establish a statement on how our historic monuments should be preserved to keep our cultural identity alive, where new and modern buildings can coexist.

Revival of Cumilla Townhall : Developing the concept and form derivation:

After the establishment of the townhall building, the first renovation was in 1885 and the second renovation happened between 2002-2003. There are no official plans or documentation of these two phases of renovation has been found. Added to that, there have been changes made in the original plan of the townhall building. Considering these facts, the site’s heritage context, and its location in the city center, developing a design solution here was challenging. Extracting illegally occupied buildings allows the site to achieve its full potential as a public city center, thus revitalizing the entire Cumilla townhall complex. To derive a strong concept, an in-depth analysis of public activity, cultural facilities, heritage properties, and other amenities was required.

The masterplan is developed to create a mixed-use zone with the rearrangement of existing functions along with proposed functions for the new townhall and library. While preserving the old townhall building. These zones are stringed together with a front plaza and a field which serves them all as well as creates a sense of place in the city. For instance, the plaza can be used for spillover during Jumma prayer while in the afternoon it can serve as a window shopping or recreational space for city dwellers.

The heritage building is proposed for adaptive reuse as an exhibition space, with some modifications to return it to its original shape.

If we think that, the heritage of the city is in the cultural or emotional connection of people with a particular place, building, or monument then the heritage significance of century-old “Birchandra Gano pathagar and Nagar milonayoton; Cumilla Townhall” is immense. In the name of development, demolishing such heritage is disappointing and alarming that we are losing our sensitivity and responsiveness towards our culture and history. The goal of this project was to, establish the idea of the co-existence of new and old by preserving the old building while introducing new ones with all modern facilities. Added to that, the idea was also to revitalization of the city center and transform the Cumilla townhall into a cultural hub.

This project was an academic approach with a neo-contextual perception to show sensitivity towards the tangible as well as intangible heritage of one of the oldest cities of Bangladesh. Therefore, awareness and consciousness towards heritage can be promoted since heritage is an integral part of both the present and the future that we will create.