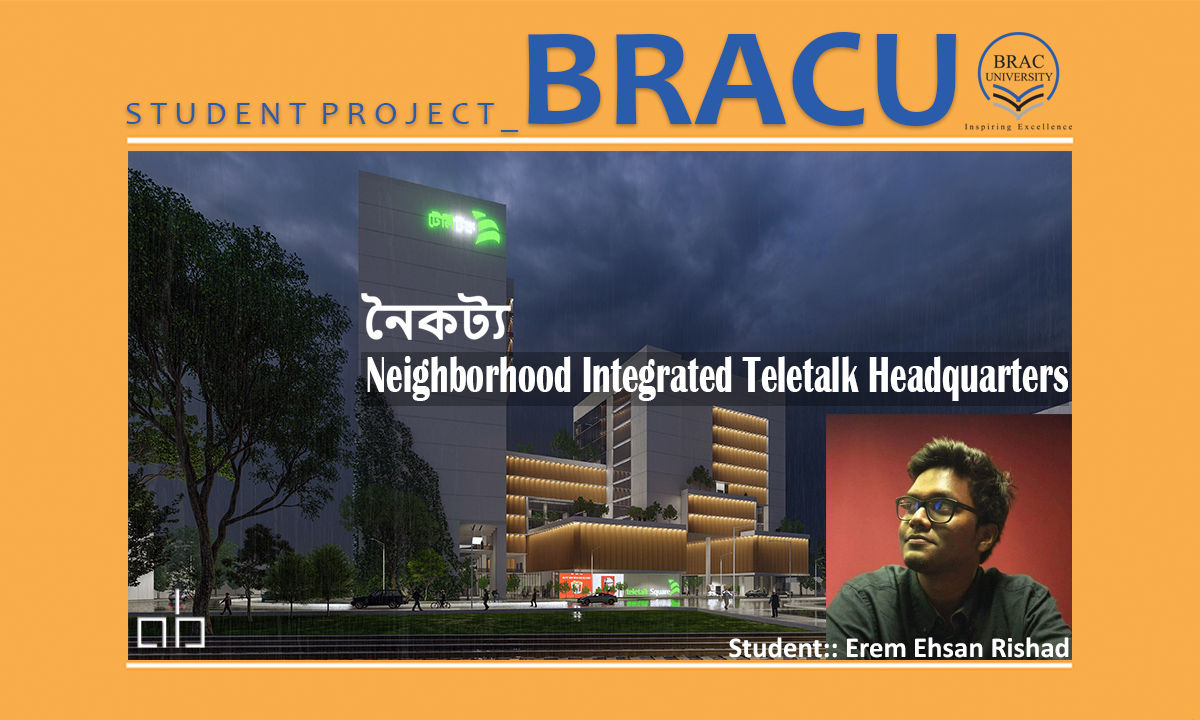 Teletalk Bangladesh Ltd. It is the only government-run cell phone administrator in Bangladesh, with the brand name “Teletalk”. Beginning its excursion in 2004, Teletalk presently has a subscriber base of 4.5 million. To support Teletalk’s business, the board, and administration, and proclaim its solid presence in the public and global field, Teletalk has chosen to construct its central headquarters. Teletalk doesn’t have a legitimate central authority. However, its offices are spread generally around various pieces of Gulshan, Dhaka. This big organization needs to have its own office at its premises for the best of the business. This exposition paper accomplishes my deals with my academic architectural design journey of Teletalk Headquarters as how to make the project an energy-efficient, an interactive iconic landmark with public accessibility and thoroughfares, from the background research to the finished design product.

Teletalk is not a very popular telecommunication service in Bangladesh as there are other competitors like Grameenphone, Banglalink, Robi Axiata ltd which have more users than Teletalk. The headquarters could’ve been an iconic large building fulfilling all its needs, but the project focuses on the publicity of the Teletalk as it has been introduced with a public plaza named “Teletalk Square”, where the surrounding neighborhoods can fulfill their needs. The study of this commercial cum residential site of Tejgaon shows that there’s a demand for public activities and services. Therefore, the site is used for publicity as well as the necessity of the surroundings, which can uplift the number of users as they know more about Teletalk.

The site is situated in between two residential neighborhoods. The demand for a path was prominent throughout the site. Hence, the site is open to the public, where a pedestrian can have an experiential journey from one neighborhood to another.

Dhaka has very few greeneries remaining, as modern urban life has forced its habit to change, depleting its numbers of vegetation. The project highly focuses on preserving the existing greeneries of the block by placing the masses on the outer edges, which helped create a central courtyard and a chance to preserve the greeneries.

the strong points of the project as per the design approach and philosophy is that The headquarters is a resilient building to survive and maintain operations under extreme conditions and a sustainable energy-efficient green structure that adapts the capacity of the building for multiple uses and ways. The project is developed in a way where different spaces meet the needs of the people who are going to use them and the technical requirements of the programs for maximum efficiency, both public and private. The aim was to integrate the urban fabric’s character and give back to the site surrounding community by preserving the greeneries and providing public facilities.

The form is based on the surrounding neighborhoods and climate considerations which is suitable for Dhaka city, The block works as a path connecting from one side to another for the pedestrians while the preservation of the greeneries helps it to enrich. Throughout this path, people will get to know about Teletalk and its offers, which will enhance their publicity. Later on, the form adds inner courtyards throughout the mass for better interactive spaces considering the climatic situation. The zoning of the final mass points out the public zones and the private zone, which is the main headquarters facilities.

A very well done project. The accessibility of the public to a headquarters complex is a challenge here, which has been done quite nicely by segregating the public and the private zones. However, the central courtyard could’ve been more celebrated by engaging multiple activities. For instance, it could work as a playground which can be used as a congregation space when needed.